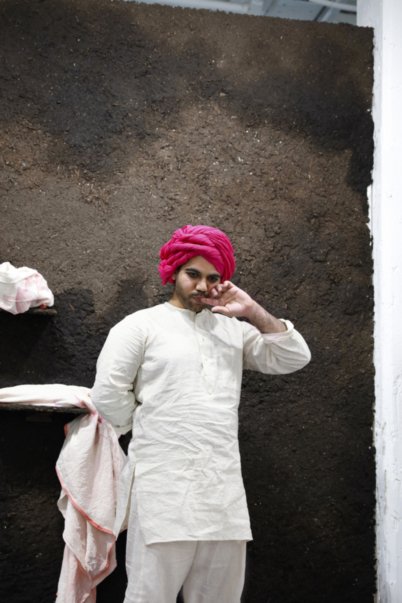 By JULIAN A. JIMAREZ HOWARD
Link to the original post.

Kuldeep Singh is a multi-disciplinary artist working between New Delhi and New York. His works unfold like a non-linear narrative through a hybrid system of performance and visual art. While he is classically trained in the art of Odissi, an Indian classical dance form first codified circa 200 BCE and still evolving, Singh often deconstructs and reuses the tradition instead constructing visually arresting theatrically inflected situations where he explores contemporary life through the lens of ancient myths and colonial histories. His most recent show, Through the Kali-Eros is a timely engagement with the realities of the post-colonial world, in particular examining the confusing relationships between abstraction and representation, love and pity, time, terror, destruction and protection. It is constructed as an installation based performance project where meanings and boundaries are blurred through pathos and eros using the notion of the Goddess Kali as a system of performativity and sonic tropes equated to Eros. Set to an hypnotic score drawn from Hindustani classical music layered with tones of prolonged echoed narrations in gibberish and live instrumental music (collaborators include Jeffrey Grunthaner on electric guitar, Russell Cole in movement, and Harsh Shah on instrumental sitar). The work interlaces a myriad of haunting gestures interspersed with a film projected on suspended painted surfaces. These performative acts, reflecting on a chapter in the 12th century Sanskrit tome Manasollasà that addresses the nature of dance, are fragmented in nature and unfold on a stage of cracked mud and dirt ground built within the Knockdown Center's large industrial space. In anticipation of the show we sat down to talk about some of the ideas behind his work and what he has coming up next. (This transcript has been edited for length and clarity) [...] indicate extra textual references.

"Mud Objects" by Kuldeep Singh. Courtesy of the artist.

Julian A. Jimarez Howard: Can you talk to me a bit about where the idea for Through Kali-Eros came from? What is the connection to the concept of Shringara, or a longing sort of Eros? The idea indeed feels very contemporary, in particular given that it’s taking place in New York a city charged with both loneliness and sexual desire.

Kuldeep Singh: I think Kali [the Hindu Goddess of death, time, and often associated with sexuality and violence but also seen as a motherly figure, associated with feminine energy creativity and fertility] and Durga [a warrior goddess seen as universally beautiful, slaying demons and keeping the cosmos in order] are on the same page, you know. Kali is often a misunderstood goddess. She is a lot broader than a devotional calendar art representation. There is a sense of the infinite and the incomprehensible. She is disgust and full of loathing, but she’s also erotic and loving [the Goddess is unclothed though adorned with various dismembered parts and her flesh is literal space] which I think is a great combination, you know, disgust meeting Eros, which we often don’t talk about.

KS: When we talk about Kali, and I think the majority of the global population knows about Kali through different sources, it’s not just one Kali. Kali is rather a manifestation of so many different Kalis, so many regional gods and goddesses that developed over centuries, pertaining to the Land which are both wonderful and powerful. It’s this sense of primitivism [the raw power of nature] that I’m interested in. It’s through these many different points that Kali comes into the picture: she’s benevolent, she’s fierce, she’s the power, she’s the submissive, she’s the masculine meets the feminine, perfect meets the imperfect. I’m utilizing these different metaphoric layers, these sort of troops, to recreate myself, to talk about war-torn lands, to talk about socialism, to talk about how human beings take. I think that’s how Kali comes into scene, thinking through a different Kuldeep and wondering how these human problems, these issues in our human world, could be resituated or even negated. I’m making myself a parallel universe. Future meets the past.

JAJH: And so this concept of Sringara comes in…?

KS: Yes. The word has a very kind of everyday colloquial meaning of, to adorn and present ourselves in an everyday situation. This is one component of it, but in English it would translate as Eros, and Eros is not just the erotic or sensual or sexual, it’s etiquette, it’s lived. I was talking with one of my collaborators in movement Russell Cole because he also asked me about this. You see, even the way we want to look or act, the way we dress and want to be seen, we live this everyday and laughter and joy are subordinated to that. These [ancient] texts and knowledge that I’ve studied, the emotions are an ever contemporary subject, but the ways in which they manifest, that is something which is always of its own age. This is how I talk about the present realities of the post-colonial world, of the third world, of white supremacies. There will be some acts which directly suggest these dynamics because my collaborator is white, but his relationship to my brown body is somewhat ambiguous and somewhat subordinated, and I will have him actually smashing these balls of earth as I stand next to him. So there will be these sort of political conversations, but in a less direct way. And that’s my take. So I think your first question here sort of has all the answers to what’s going on with this work.

JAJH: Indeed! You often collaborate with many individuals, why is that such an integral part of your practice and what brought this particular group together?

KS: Well, it’s an installation; for me, that’s a large system of performances that happen in a given repertory. But my practice also has this ideology where, when I become the creator I also become the director. So given the need of a specific project, informed by its ideas, I look at how to best add these elements. For example my last project at Asia Society was just dance so I needed singers and musicians, but this is more performance art oriented where I needed to work with actors where I can direct and deconstruct the movements. And I’m making the overall score myself on this one because I came through this tradition along with movement and drawing. I think that’s another reason why I need collaborators. Because in my hybrid practice I’m not just a painter or a visual artist, I’m also a movement maker and a 3D object maker. I think those [creative] energies translate through multiple people and it becomes an expanded field. I can manifest my ideologies through them and can also become a part. It’s like a solar system.

JAJH: Right! The word that comes to mind for me is Gesamkustwerk, or like a total artwork because of how immersive these are. But I like the idea of all of these elements swirling around, coordinated together into something even larger.

JAJH: So what I think is also so interesting about this work is the complex way that you engage with what you call “breaks in colonial histories.” I know for example the repression of Odissi under British colonial rule...

KS: ...Right, because of this Victorian morality issue

JAJH: Indeed, but yet there are so many elements you get into at a granular level here particularly because of the collaborators you’ve chosen and how the work is getting made here in New York alongside the intermingling of ideas both Western and Non-Western in your work.

KS: Yes, I sitting with a curator once and she got the crux just like you did there. It’s not the conflict necessarily of the East meets the West; the objects I’ve made are very contemporary in a Western sense but through the performance, they get an extended charge, a deeper meaning, the performance reconnects the two and infuses a deeper context into the form. That binary equation is always rebalancing itself. The objects are pretty inspired from Western fashion and I’m making all of these with Western tailoring, but the way they get draped and moved on the body, this is from my Indian sensibility. So there are lots of messy parts where the work is informed by both and informs both simultaneously.

JAJH: So that was going to be one of my next questions. Can you speak a little about the different elements in the work and how they come together?

KS: I do a lot of detail drawings [shows sketchbook], and I go to places like the Metropolitan Museum’s Middle Eastern, Greek and Egyptian Galleries and my understanding of these histories, both Eastern and Western is based on its objects. And when you see so many of these things you start to see the similarities. For example this one [shows drawing] of an Egyptian figure with the hips jutting out. It’s all connected. These drawings then become the movements. Or these mud balls that I’m making, the sphere is even this atomic idea, and the smashing of particles, but it’s such an old idea from Indian Vedic literature. From the infinite comes the one, and from the one back comes the infinite. This again is Kali!  And this is subatomic particles. But you know in this country we don’t tolerate dirt, but India is a dusty country. And so my stage becomes this battleground.

KS: I’m thinking, you know, I should spend some more time in clay and earth actually. It’s a bit of a revelation, holding clay, holding soil. What you can do with it! Oh my god it’s incredible. I should be making a whole array of sculpture!

Studio shot courtesy of the artist.

JAJH: Well it’s so primordial, right?! And, of course, now we come back to Kali, and so it’s full circle!

KS: On a grand scale the show is Kali, on the subscale, you become Kali. What is Kali? That’s huge question. She is both creation and destruction. There is no straightforward answer! I’m not interested in easy answers.

JAJH: What are you hoping viewers get out of seeing this exhibition?

KS: It will change you. It serves a totally different purpose than watching the news or watching cat videos. The music is becoming more powerful. I’m adding surround-sound and working with my sitar player and Jeff on the guitar droning. And the acting is also very strong. It will really ground you, at the same time it will make you vulnerable. It will cleanse you. I think what I want people to get is a sense of concern and a sense of care, letting people see themselves as a large part of humanity and not this nation or that nation.

Kuldeep Singh Through the Kali-Eros is March 30th at the Knockdown Center in Queens presented in collaboration with Residency Unlimited. Free tickets and more information is available on their website. WM

Contributor: JULIAN A. JIMAREZ HOWARD
Julian is an artist and curator based in New York. He is a Co-Director at Associated Gallery, and the former founder of OUTLET Fine Art. His exhibitions have been featured in The New York Times, New York Magazine, Hyperallergic, Artnet News, Artinfo, Bushwick Daily and many others. He writes primarily about topics of space, place, and representation.