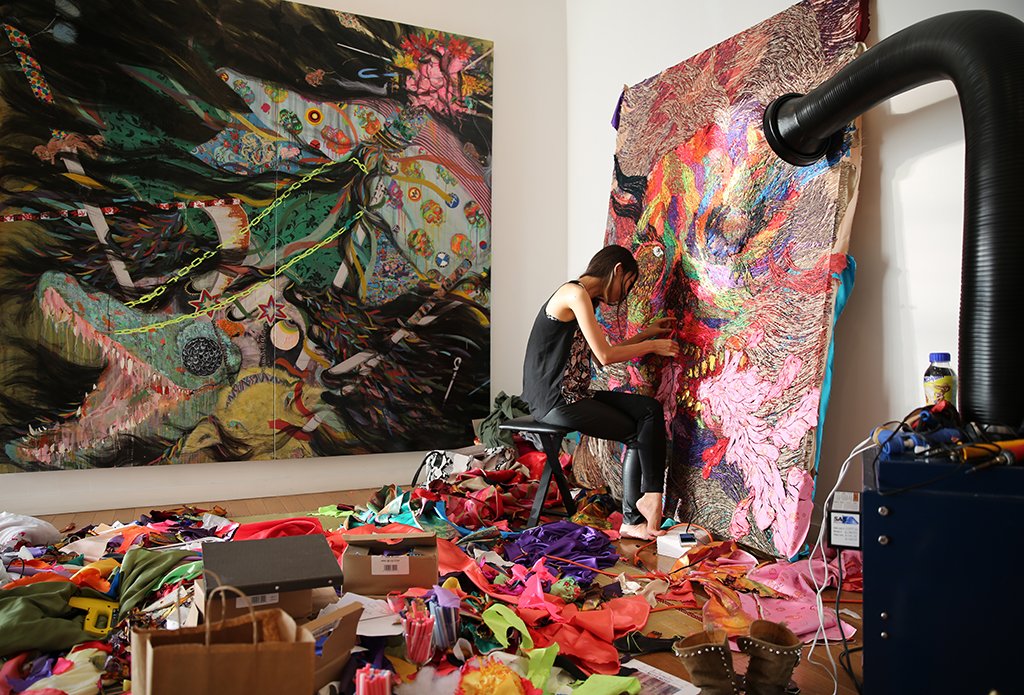 The artist Hyon Gyon in her studio at Residency Unlimited. Image courtesy of RU.

Are You an Emerging Artist Looking to Raise Your Game? Here Are 7 Residencies That Can Help

We surveyed a group of experts to find the best incubators for talents on the rise.

Artist residencies vary in location, amenities, and reputation, but they all share one principal goal—to give artists time and space to create their work. In fact, while they may sound like summer camp for creatives, stocked with rustic cabins, communal meals, and rolling hills, most of them are actually venues for continuing the hard work they did in school.

For young artists just emerging from art school or an MFA program, studio space may be prohibitively expensive, and leaving the nurturing bubble of school is daunting. Residencies can fill that gap—if these up-and-coming artists know which ones to apply for.

Of course, admission is competitive, often with thousands of applicants vying for the coveted spots, and negotiating the terms of stipends and expenses can be thorny. So artnet News surveyed artists and curators to determine the best residency programs for newly minted artists.

Among the experts we polled were Daniel S. Palmer, associate curator at New York’s Public Art Fund, and Trevor Schoonmaker, chief curator at Duke University’s Nasher Museum of Art; the artists (and alumnae of numerous residencies) William Cordova and Jacolby Satterwhite; Megan Miller, director of career development at Maryland Institute College of Art; and Lalita Salander, a PhD candidate at England’s University of Reading, whose focus is residencies.

Below, see the seven programs that made the cut, in alphabetical order.

Artists Jun Kaneko, Tony Hepburn, Lorne Falk, and Ree Schonlau conceived of the Bemis Center as a laboratory for experimentation, revamping a vacant industrial warehouse in Omaha’s historic Old Market district. A $2.6 million expansion in 2011 added sculpture and ceramic studios and 6,500 square feet of project space. Today the program boasts over 1,200 artists applying for 36 residencies each year, where they get access to private live/work studios ranging in size from 820–2,400 square feet, as well as access to a library, sculpture studio, and woodshop.

2. The Center for Photography at Woodstock For over 65 percent of its participants, the Center for Photography at Woodstock is their first residency experience. Founded in 1977 on the grounds of an artist colony that hosted Bob Dylan in the 1960s, the program is geared toward US artists of color working in photography and related media. Participants have access to darkrooms, digital labs, and a library. The program offers a stipend for food and travel. Among the perks is the opportunity to work with visiting professors including Ruth Bernhard, Keith Carter, Sally Mann, Mary Ellen Mark, and Arnold Newman.

3. Headlands Center for the Arts Headlands is housed in artist-renovated buildings in the former US Army installation Fort Barry, located in the Marin Headlands. For outings that might offer inspiration and clear a young artist’s head, there are 13,000 acres of coastal national park outside of San Francisco. The program offers fully sponsored (free) residential and non-residential spots to approximately 30 artists each year, from March to November. Residencies range from one to six months. Notable alums include Sanford Biggers, Mark Dion, Ann Hamilton, Nikki S. Lee, Julie Mehretu, and Andrea Zittel. Housed in a former factory in East Williamsburg, Brooklyn, the program has 35 private studios, exhibition and project spaces. Accommodation is not provided, but a stipend is offered to supplement living costs and artists’ materials. ISCP’s program has four core activities that artists in residence are encouraged to participate in: visiting critics, field trips, salons, and open studios. Founded to support artists who “demonstrate that painting and sculpture are significant cultural necessities,” the Joan Mitchell program recently expanded to include an emerging artist residency. It offers artists living in the Big Easy a five-month stay with individual studio space, professional development support, and studio visits with local and national artists and curators. Sited in the Tremé neighborhood (portrayed in the critically acclaimed TV series of the same name), the foundation also offers programs for young artists between the ages of 21 and 26 and a community engagement program for projects to enhance the local culture. RU is focused on helping artists to build a network with art-world professionals, and they put their money where their mouth is. Among the visiting VIPs in 2016 were former Whitney Museum director David Ross, now chair of the MFA art practice program at School of Visual Arts, New York; Mary-Kate O’Hare, adviser at Citi Private Bank; and Sarah Watson, chief curator at New York’s Hunter College Art Galleries. Visits from those pros, said alum Željka Blakšić, encouraged her “to take on the more ambitious and risky aspects of my creative practice.”

The Fresco Barn at Skowhegan School of Painting and Sculpture. Image courtesy of Skowhegan.

Situated by Lake Wesserunsett and spread across a 350-acre farm in rural Maine, the program is known for its intensive nine-week program that encourages interdisciplinary work in a rigorous environment. There’s dormitory housing with individual studios open 24 hours, access to a sculpture studio, fresco studio, media lab, and a 10,000-volume library. Of his time at Skowhegan, artist Jacolby Satterwhite told artnet News in a phone interview that “the great thing about it, is the first day of orientation, they say to you, ‘If you don’t make art, we don’t care.’ It’s about refining a process, exploring, and failing, not about creating a product—it teaches you a lifelong practice.” Skowhegan strives to create an ecosystem of creative thinkers, and stresses a community atmosphere; notable alumnae include everyone from Alex Katz, Diana al-Hadid, and Ellsworth Kelly to Robert Indiana, William Pope.L, and Nari Ward.