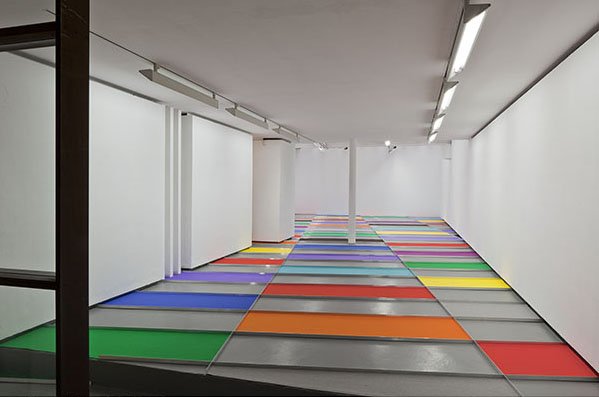 Born in Bochum (Germany), Veit Stratmann lives in Paris. Stratmann's work essentially rests upon questioning: can an artistic gesture be based on the notions of choice, of decision-making, of the posture of those who encounter the artwork? Can this decision-making become constructive material? If political action originates in the act of making a choice, can an encounter with art generate a permanent oscillation between a political and an artistic gesture? Can an artistic gesture undo the coherence of a space without affecting its physical integrity, create a “parenthesis” or construct a loophole in its meaning in order to generate a statutory blurring?  Can this statutory blur become creative matter?

The artist’s works are often site specific although he has also shown extensively in gallery and museum contexts. Drawing and writing are also ongoing areas of engagement for Stratmann as tools of projection, control and distancing. In 2004, a residency at the Atelier Calder (Saché, France) was the occasion for the artist to create a new series of objects and to integrate them with images realized in 3D. And in 2009, he realized a photographic series of ex-votos in gardens that was published as an artist book, Shrines by Les Presses du Réel.

In a recent installation at the Galerie Valentin (see image online), the artist deepens his interrogations, by creating an installation composed of rectangular pieces of carpet (2 meters by 6 meters, surrounded by a 3 centimeter high aluminum frame) arranged in a grid on the floor. Being too short to allow for a comfortable stride of two steps and too long for a one-step rhythm - and having the added inconvenience of the raised aluminum edging - the floor installation confronts the spectator with each step: where to place one’s foot; how to regulate one’s stride to avoid tripping. The visitor becomes an actor as he negotiates his every step in front of other visitors.

Veit Stratmann's residency benefits from the gracious support of the agnès b endowment fund.