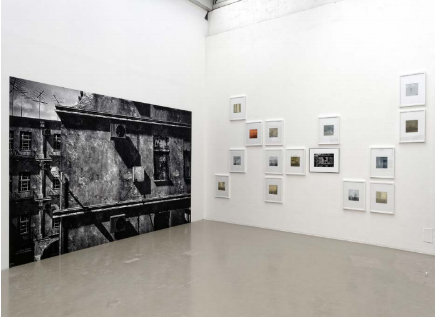 BIO/ STATEMENT:
French photographer Thibault Brunet is the winner of the 2016 Photo London John Kobal Residency Award providing the artist with a 2 months residency at RU. Brunet first gained attention in 2007 by chronicling war-torn landscapes by documenting the virtual world of video games like “Grand Theft Auto: Vice City”. Instead of photographing the action in the game, we only see the backdrop in which the player moves. The photographs are not traditional images made with a camera, but screen shots of computer renderings that capture landscapes and portraits. Brunet’s entry into virtual combat zones was motivated by an interest in “American popular, historical, and political culture.

With his current project ‘Typologie du Virtuel’, Brunet explores France through Google Earth by selecting fragments from a virtual world coproduced by multiple individuals. The data updates do not reflect any identifiable objective. The images in this series are produced from buildings located in peri-urban areas and reproduced in 3D by GE users.

Shopping centres, HLM (social housing) and major commercial company towers fall within a global architectural typology, lacking in any connection to the region.

The artist entrenches them in a specific space and time by adding a defined drop shadow according to the day and time of their production. He recontextualises the image by relating it to the first manufacturer‘s action and forms a new intermediary by joining a collective creative chain. The shadow is the context, the creation of a projection space vanishing into the mist that the artist compares to a ‘digital cloud’, where buildings seem to emerge like pop-ups.

In 2012 Brunet was selected to participate in “Photo Month” in Paris, Berlin and Vienna. That year he was aksi a finalist for the Aperture Foundation Prize in New York and Talents FOAM 2013 in Amsterdam.

In 2014, Thibault took part in the  collective project, "France(s) Territoires Liquides". In 2015, "Typologie du virtuel" was exhibited at the Tri Postal museum (Lille – FR) and the Biennale de Lyon. Thibault embraced a new approach for the PMU Carte Blanche 2014 at the BAL (Paris – FR) and worked on the digitalization of the real world using a 3D scan. Since then, this project has been ongoing with the technological partnership of Leica for the series « Territoires circonscrits » and exhibited for the first time in November 2015 at the Galerie Binôme (Paris – FR). In parallel, Thibault is working on the publication of two photography books : "Typologie du virtuel" (release in October 2016 (ed. Laponnière) and Inexplorations (release Nov 2016 (ed. Loco).

SUPPORT: Thibault Brunet is the second recipient of the John Kobal Foundation Award awarding the artist a 2 month residency at RU.