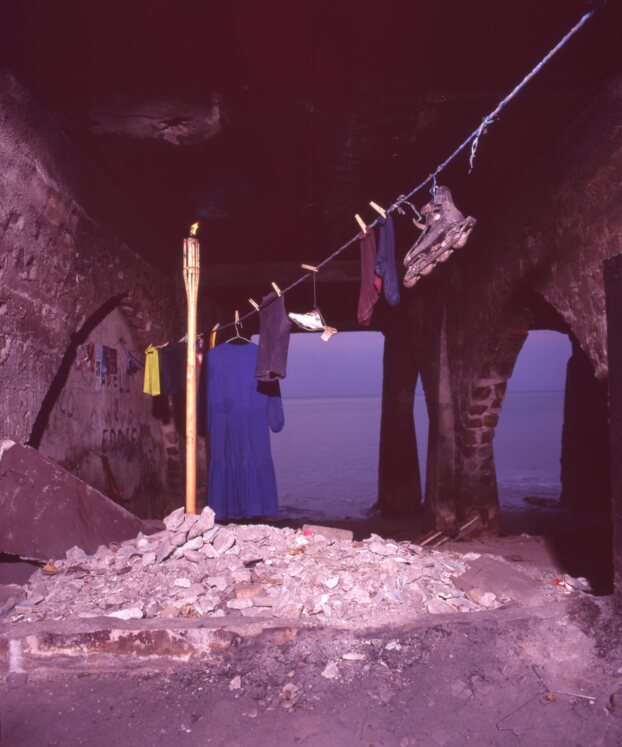 Eduardo Navarro stands out among Panamanian masters as a champion of expressionism in the contemporary fine arts of the New Millennium. The artist explores his creativity through multiple disciplines such as painting, sculpture, performance art, and installations to create works with a uniquely rebellious visual impact and accomplished metaphors.

Navarro is slightly more anchored in real-world forms, although his subjects are endowed with a supernatural and, at times, ghostly power. His works command our attention because of the subjects they present. It does this daringly, creating fierce figures that simultaneously attract and repel, reminding us of the dark, hallucinatory work of Francis Bacon (1909-1992).

After winning the Fundación Gilberto Alzate Avendaño 1994 International August Salon Prize in Bogotá, –one of the most prestigious in Colombia– his career has progressed steadily. The artist uses his brushstrokes to render before us his very soul.

Navarro is currently perhaps best known for his unbridled steeds full of energy, a subject he has been exploring for some 17 years. The artist continues to innovate, however, by using printed fabrics to add another layer of texture to these explosively virile wild beasts, once again showing off his uncontrolled balance between background and form. But the horse is simply a pretext for Eduardo Navarro to explore his expressionistic energy. What better animal to represent the spiritual freedom and rebellion in the splashes of the artist's brush than a galloping horse? What better form of life to oppose to the dramatic weight of his human figures than an unfettered stallion?

See the interview with the artist here.

See this video for more information about the artist.

Support: Eduardo Navarro's residency is made possible with support from the Rockefeller Brothers Fund, NY.