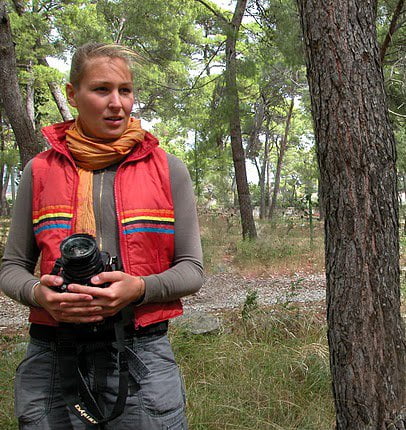 BIO/ STATEMENT:
Anna Fabricius is a photography and video artist. In her practice, she continuously explores the notion of ‘group’ – how it is constructed and how the individual positions itself within this setting. Her photographs and videos depict specific groups such as manual laborers, factory workers, athletes or housewives. She photographs them during their working hours at their usual workplace whilst engaging them with improvisation games. For example, the series Hungarian Standards illustrates professions acting out the same position within their environments. Repetition illuminates the similarity of her subjects and defines the iconic interpretation of each profession. Subtle variations in individual body posture suggest separateness and remind us that groups consist of individuals who ultimately reinforce or rebut social preconceptions.

SUPPORT:
Ana Fabricius's 3 months residency is supported by ACAX | Agency for Contemporary Art Exchange as well as the Trust for Mutual Understanding.