Katya Grokhovsky in a group show “Ars Continuum: Amelie A. Wallace Gallery 1978 to the present” at Suny College 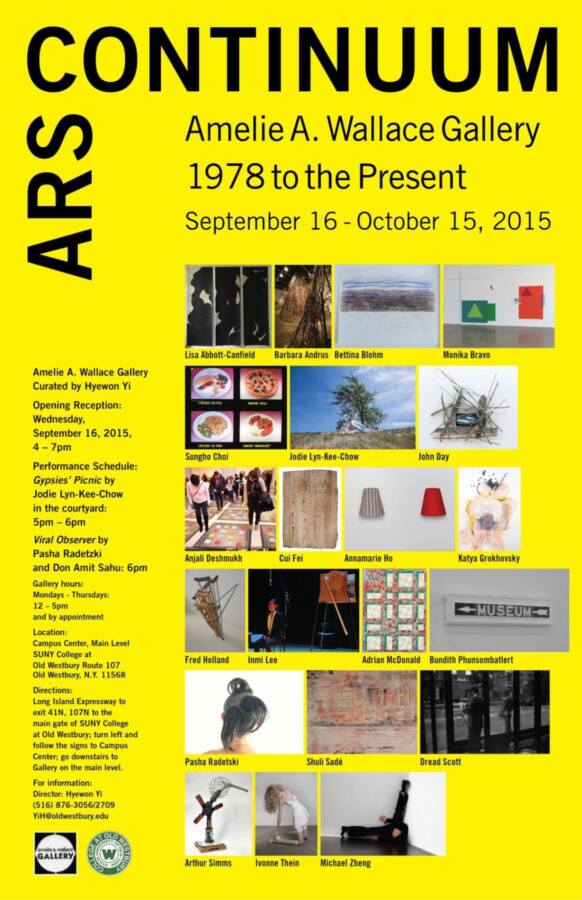 The Gallery was named in honor of Amelie A. Wallace, who bestowed a substantial bequest to establish the Gallery’s endowment. Wallace was a supporter of Old Westbury who championed student rights as well as advocating the study of art on campus. Luis Camnitzer, the Gallery’s founding director, shaped much of the Wallace’s early history and coordinated exhibitions closely with the teaching goals of the Visual Arts Department of the College. Among the Gallery’s other notable directors and curators were Benjamin Buchloh, Eugenie Tsai, and Helen Molesworth. In the 2000s, Catherine Bernard and Ana Tiscornia brought renewed vitality and attention to the Gallery, raising the level of intellectual discourse on the campus through Contemporary art.

A reception to mark the opening of Ars Continuum: Amelie A. Wallace Gallery 1978 to the Present will be held between 4:00 pm and 7:00 pm on Wednesday, September 16, 2015. During the opening reception, Jodie Lyn-Kee-Chow will perform her hour-long Gypsies' Picnic In the courtyard; audience members will be invited to share a salad made by the artist as part of her performance. Afterwards, Pasha Radetski and Don Amit Sahu will perform Viral Observer inside the Gallery. The exhibition will remain on view through October 15, 2016. Gallery hours are Monday through Thursday between 12 pm and 5pm, and by appointment.
- See more at: http://www.oldwestbury.edu/events/2660#sthash.cjNcsxDy.dpuf