"Tremblay's poetic and often ritualistic-looking photographs (as well as videos, performances, artists books and mixed media pieces) explore the broad theme of awareness from a sensibility informed by both the visual (cinema) and non-visual (including literature and science). A French-speaking Quebecois by birth from a small region that may resonate with northern Idaho, she will spend her time at (re)-createre-mapping family history and identity by re-photographing her father's ceramic art and tools,as well as some of her own making."

Each of the artists in residence will be provided with transportation to and from Idaho and materials for her work. Chosen by a jury formed from the organization's board of directors, Splan and Tremblay will spend two weeks at the (re)-createproperty on the shores of Hayden Lake in Kootenai County, Idaho.  Although both live in the New York City region,  (re)-createboard member/juror Kathy Brew noted that applications arrived from Europe and Asia, as well as North America. "It's wonderful-and frankly a little surprising-that so many artists not only learned about the residency," she said. "But wanted to participate in our inaugural session."

Applicants were evaluated on the basis of artistic excellence and the logic of rural Idaho as a place for them to work, as well as their connections to (re)-create'saims. The organization's mission statement announces its support for work that synthesizes "art, sustainability, cultural & personal renewal" and those who create it. "Let me say a little about the emphasis on renewal," said board member/juror Robert Atkins. "Cultural renewal refers to art and its potential to positively impact viewers. By personal renewal we mean the benefits to the artist of a period of reflection in nature." Gale Elston, (re)-create's founder/director and former Executive Director of White Box, a New York art space, added, "Having grown up in the immense wild beauty of northern Idaho and eastern Washington, I think it presents the condition of the possibility of an artistic  disruption  which will transform the site in an exciting way."

During their stay at Hayden Lake, the artists will leave a "trace" or "mark" of their experiences on the site. The public is cordially invited to view them and to meet the artists at an open house on Sunday, July 5, 2-5 pm, at 10793 Hayden Lake 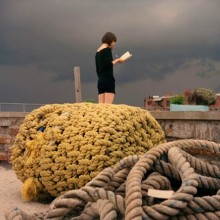