On 12 February 2017 the jury of the Foundation of the Kunstfonds awarded 25.000 Euros - "HAP Grieshaber-Preis der VG Bild-Kunst" to Frankfurt-based artist duo Özlem Günyol & Mustafa Kunt for their outstanding artistic achievements.

Özlem Günyol (* 1977) and Mustafa Kunt (* 1978) studied at the Hacettepe Universitesi in Ankara and studied at the Städelschule Frankfurt Günyol with Ayse Erkmen and Kunt with Wolfgang Tillmans and Willem de Rooij. They are the 19th HAP Grieshaber Prize Winners.

Günyol & Kunt investigate with a critical distance the meaning of language, symbols and mediaeval utterances in different cultural backgrounds. They explore identity with an interest in ciphers that represent power and authority, and touch on current social-political issues. By means of common signs and codes, they cover our perception patterns and sometimes expose them as questionable. Their forms of expression - print, video, sculpture / installation - are always bound to an artistic-aesthetic form. For example, the impeccably glossy, regularly twisted form of a jagged metal spiral gains superficial explosiveness through the association as a barbed wire. At the same time the recognizable artistic individual production, however, denies this obvious interpretation and points to deeper meaning levels A demo in the Gezi-Park. This sculpture of the sculpture impressively demonstrates the exhausting and yet balanced ambivalence of artistic form and political content that characterize the work of Günyol & Kunt.

In September 2017 Özlem Günyol & Mustafa Kunt will present their work in the project space of the Deutscher Künstlerbundes in Berlin on the occasion of the HAP Grieshaberpreis.

With the award of the prize named after the painter and Holzschneider HAP Grieshaber, VG Bild-Kunst honors an artist, who was decisively involved in the initiative to build VG Bild-Kunst. Since the 1970s, Grieshaber has been extremely active in the copyrights of his artists' colleagues, and has also vehemently expressed his commitment to the social protection of artists.

The funds of the HAP Grieshaber Prize are donated by the Stiftung Kulturwerk of VG Bild-Kunst. They come from the income for artists' rights, which are combined in VG Bild-Kunst in Berufsgruppe I (art). The prize money is a recognition of artists for artists. 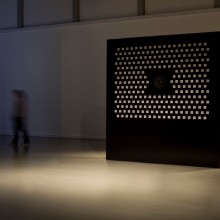 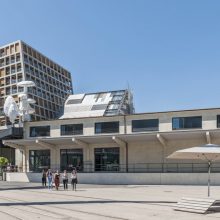