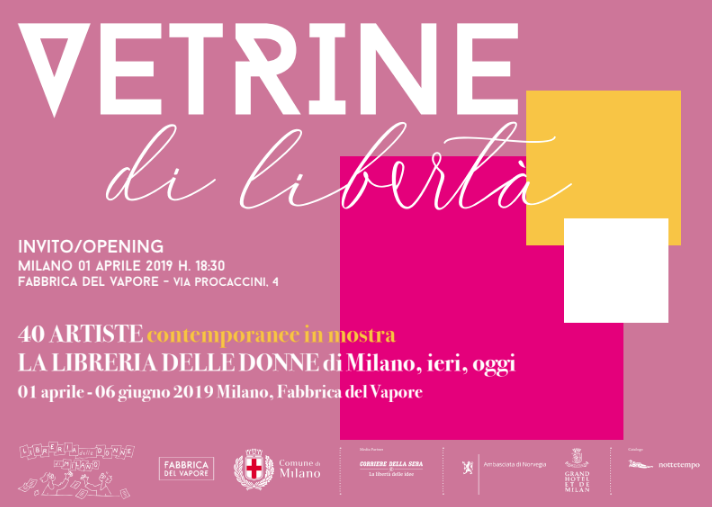 “Art is not universal because it overcomes difference between men and women, but because it represents that difference through the ineluctable movement taking place between the creator and the observer”, writes Francesca Pasini in the catalogue. The female artists’ works displayed in one of the bookshop’s windows (the “Fourth” window), along with those donated in 1975, on the one hand tell the story that is such a vital part of this exhibition, with a series of cultural and political meetings. On the other, as they are intertwined with the bookshop’s practice, they show that women’s freedom has been born. A change in civilisation is underway; and art is the real, symbolic and metaphorical figure of that civilisation, from prehistoric times onwards.

Vandana Shiva, who was previously a guest at the bookshop during the Milan Expo, is returning especially for this occasion with a conference dedicated to “eco-feminism, one of the key responses to the environmental crisis and climate chaos”.

The Libreria delle donne di Milano (Women’s Bookshop of Milan) was founded in 1975 with the financial support of Carla Accardi, Valentina Berardinone, Nilde Carabba, Dadamaino, and Lucia Pescador, who donated their works. This exhibition includes those by Accardi and Berardinone, on loan from the art collectors who had purchased them at the time.

After the bookshop had opened, Lea Vergine and others came up with the idea of a portfolio of lithographs by Carla Accardi, Mirella Bentivoglio, Valentina Berardinone, Nilde Carabba, Tomaso Binga, Dadamaino, Amalia Del Ponte, Grazia Varisco and Nanda Vigo. The portfolio, accompanied by texts by Lea Vergine and the artists, is included in the exhibition and the catalogue.

Then and now, politics, art, philosophy and literature have always been the cornerstones of the bookshop’s activities.

The exhibition at the Fabbrica del Vapore is just one instance of the overwhelming rise of female artists the world over. This rise led to a stronger desire to look at and understand the artists of the late 1960s, whose works – particularly in the US – heralded and accompanied women as they gained a voice all over the world, what we call feminism. And at the same time, “it shows in the work of art a subject created by women or men and no longer by a neutral artist” (Pasini).

A bookshop twinned with the one at 29, Via Pietro Calvi has been set up at the Fabbrica del Vapore, offering a selection of the bookshop’s titles, past and present.

Scheduled events during the Exhibition

Me too, analysis of an epochal shift

The civilization is in the hands of women – Milan

Civilization is in the hands of women

The languages of women

Guided tours will be held during the Exhibition period