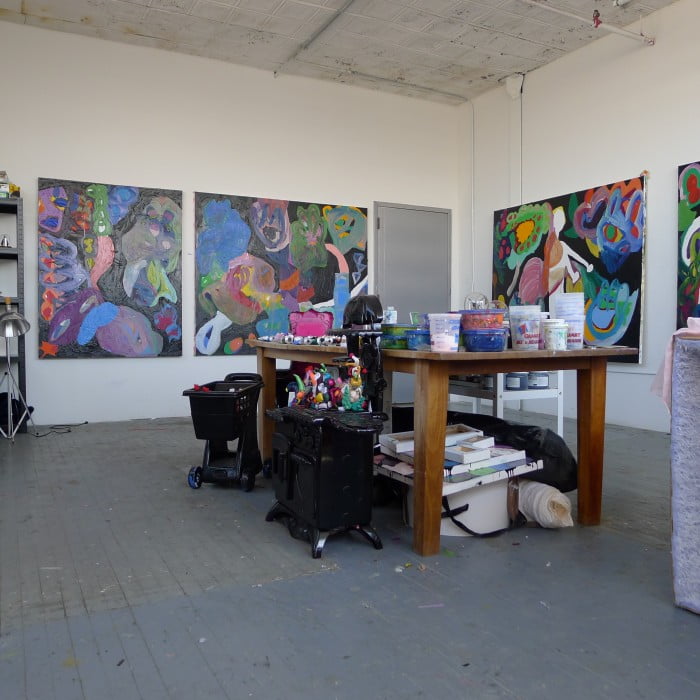 Born in 1981 in Rio de Janeiro, Brazil, painter and sculptor Maria Lynch is deeply influenced by the vibrant culture and colors of her home country, her works explore themes such as body image, identity and the boundaries of the conscious and unconscious, erotica and play, pleasure and guilt.

In residence at RU from August 2013 to March 2014, Lynch met with Ayelet Danielle Aldouby, RU's special projects curator in her studio in Bushwick, Brooklyn to discuss her influences, interests and upcoming projects.

Ayelet Danielle Aldouby: Brazil has a defined Modernist movement; has this or any subsequent movements have any influence on your works?

Maria Lynch: I think Brazil was built upon a hybrid framework: society as a whole was built and constructed chaotically, and it is definitely visible in how Brazilian art was invented independently from the rest of the world. Brazilian art has its own movements and aesthetics.

ADA: Do any of your childhood memories have an impact on how you construct your structures, and objects?

ML: Some of the work explores psychological issues and therefore some elements of my childhood do compose the atmosphere. But nothing specific. It's like my trauma is sublimated...I say trauma as a joke in a way, but we have an expression in Brazil saying that everything that has happened to you and influenced you is mixed in a big pan, and you carry it with you everywhere you go. Other references from my work include nature and the Carnival. The Carnival is the culture that celebrates life and the body.

ADA: The one thing that really struck me when I saw your work was the color breaking out of its boundaries; not keeping it as a dot of color but making it burst out of its bubble to take over the canvas. Can you discuss your initial use of color and then how you use it to go deeper?

ML: I don't know.. to be honest, it's something that is very empiric for me. It's one of those things you're not really conscious of it while it is happening. When I started painting I was 19, and it was like "wow that's striking how I put those colors together. I think I've never seen that" but for me that was quite natural, and kept me interested in putting those colors together. It was more learning and doing, and thinking that this is something I can see as a signature, as a singularity of how I put them together in painting. Even today, I've seen so many painters in my life, and yet I haven't seen this kind of combination. I add layers and layers which makes me construct a surprising color afterwards. I'm constantly adding more colors, and forcing them together in the extreme. If I don't like something I delete and add another layer.

ADA: Your color seems like it takes a life of its own. It's full of lust, almost erotic...It’s also very Abstract Expressionist; you feel the gesture, you feel the hand. Is it something that is intuitive or is it part of a meditated ongoing process?

ML: I think it's a mix. It's the way I compose and create. It's not so much about the gesture but about the intensity of how those forms will become alive. I try to make them so that they are almost falling off the canvas. They become alive, I bring them to the actual world, to the sculpture, the performance. Yeah, those are little decisions that you make throughout the process: “that works, that's interesting" and then you make the choices. But it is definitely something that I try to explore... because I don't create a space inside the canvas, they are kind of falling into it.

ADA: In your earlier work you created this semi ideal woman and you are now moving into another realm. Do you strive for the perfection or the imperfection, or is it a process that is evolving?

ML: I question perfection in my work. It's a comment on the contradiction between identity and the unconscious: the perfect woman, this idealized magazine model contrasts with the background which is celebrations, forms, color, alive, fantasy. So I think it is definitely a comment on this contradiction and also why we are slaves of morality and those things that make you feel uncomfortable with yourself if you believe in this ideal woman. This ideal is so strong in our mind.

ADA: And in our culture... do you feel the need to have a commentary on the notion of perfection as cultural phenomena ?

ML: For instance in New York, I see that more in fashion. It's really strong, of course in Rio it is too, but it's not like here. There are also these little different ghettos, even the hipsters have layers of this ideal of how we should look and behave. But I think that those women in the magazines are the epicenter. The hipsters will look at them and think of the ideal. A teenage girl struggling with her weight, and even men, will idealize these type of women.

In her sculptures Lynch entwines herself with a vision of layers, of the destruction and recreation of a colorful, patchwork body. She combines textured brightly colored fabrics and sections of plush toys to create fascinating hanging sculptures.

ADA: Can you describe your sculpting process? How do you estimate the physical form and size of your sculptures?

ML: The first one I did was the transposition of these really fantastic 2D element to the real world. By doing that, there are so many things to think of: I wanted to do something soft that had a relationship with the colors and would evolved into something else. I wanted to deconstruct the identity of people by taking over them and suffocating and deconstructing their forms and body and that led to the next process - the performance.

ADA: How did the audience come into play?

ML: After having the performance, I was so pleased to be able to interact with the audience. I think that's where it all started, people would come and hug me and others would say horrible things. It's the reaction with the public. For instance some would come and pinch my assistants because they were helpless. People were mean. It brought out those emotions and feelings and specially the things that relate to childhood. I would see people hugging them, talking to them about psychoanalytic issues and then they would tell me all about it afterwards.

ADA: You construct playful, whimsical environments. Do you expect a specific reaction from people and do you do something with it? Or do you let the audience experience it organically?

ML: I expect...the work expects I think more than me, a reaction. I haven't seen one person who sees and experiences the installation and doesn't react in one way or another. The different reactions people have, I can't control that, I don't want to control that. But I think it has a cathartic quality: there is an encounter with your unconscious, with your existential freedom, with a rupture with space and time. There are so many levels to that work. Some of my smaller works intend the spectator to have a more specific reaction more but the reactions to big installations are more variable: I see people crying, sometime staying 12 hours

ADA: The exhibition “Acontecimento Encarnado" at Galeria Anita Schwartz in 2013, had a very strong feminine presence, and now we are moving into the genderless period of your work. All your sculptural objects are also genderless, and they are not ideal. Maybe that's why people connect with them as they have all these shapes and forms and they're not de- fined by that ideal definition of beauty that we were initially discussing . And I think also that we live in such a structured society that people need that craziness and that amorphous form to be playful in their lives. So when they see it, they connect with it. It's possibly , a way out for them. Like entertainment, it's a place where they can go free.

ML: I think it's the place out of logic, out of the system. I think society is so structured by rules, and morality: what you should do, how you should do it. It's a world without judgment, it's a child’s world: children become “domesticated”when they are four. I think there are so many myths in society, how we think human beings are inherently bad and that we need to control ourselves in order to function in society. But I think everybody has both the good and the bad. I don't think that if there weren't jails or laws people would only do bad things.

ADA: What impact do you think New York had on your work?

ML: I think when you move to another city, another country, another way of structure, there is another way of thinking. You just see how that changes you and affects you and you have to adapt. So things that worked in one society don’t always work in another. So you just see how everything is constructed, the identity and the being. So I think, in general terms, I was able to create this new work: the boxes. They were kind of a break through for me because it changed the structure of my work.

ADA: Can you tell me a little about your future projects? The ones that are more like utopias or dreams?

ML: I always thought about taking over a whole building and deconstructing entirely, like, but it's so hard in the practical way. There are many ways I have researched to do outside sculptures and stuff like that. There are some fabrics you can you use for outside, some inflatables. That's totally doable, we even researched how to do it. Did I show you the one at the beach? These are very big inflatable structures, there are a few of them and they will have a lot of interactive components for the viewer and they will be interacting with water as well. I think its incredible for a work to be interacting with water. So people will have to go inside. I really want to create this ambiguity, this strangeness inside so I imagine some parts really dark, some will have really strange texture and feelings. It will be like a beast. 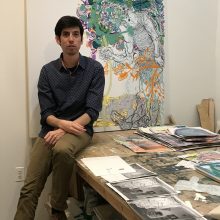 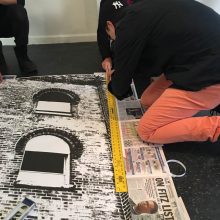 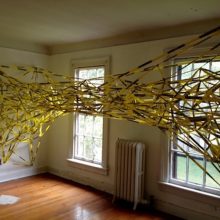