Border Crossing is an ongoing multimedia project in which Zorica Zafirovska explores mechanisms of empathy and responsibility in relation to the refugee crisis in Europe. This exhibition focuses on two lethal international violations of human rights that took place on the Austrian and Macedonian borders over the past year; the illegal transportation of 71 migrants who suffocated in the truck transporting them from Budapest to Austria in August 2015, and a false rescue map, suspected to be fabricated by journalists and blamed on activists, in order to stage sensationalist struggle photography that led thousands of refugees towards arrest, deportation, and death on the Greek-Macedonian border. As a female artist and migrant worker, native to Macedonia (once Yugoslavia), Zafirovska brings a nuanced and relevant perspective.

Stepping into the gallery you enter into a white grid on the floor. The grid is the actual size of the abandoned truck that was found in August 2015 on the side of an Austrian highway. The truck that was owned by a Slovakian chicken company was being used to illegally transport predominantly Syrian refugees to Austria. The lack of space and air caused 59 men, 8 women, 4 children, and 1 baby to suffocate to death. Upon crossing the border, the drivers discovered the tragic result and deserted the truck, leaving the 71 corpses to decompose for few days before being discovered. Each unit in the grid represents the amount of physical space that each of these individuals occupied during the 1 ½ hour drive. The simple grid becomes a powerful vehicle that transports us to that deadly border crossing. It allows us to identify with the victims and take the first step towards empathy and understanding.

Forced migrations are perpetual processes that exist in air, water, and land. Once in transit, migrants enter a state of placelessness, or statelessness, where without official documents human life becomes expendable and used as a commodity in exploitative economies orchestrated by corrupt individuals, cartels, media, governments, and corporations.

STEP BY STEP TO CROSSING THE MACEDONIAN BORDER is the translation by the Daily Mail newspaper of a leaflet in Arabic that was given to 2000 refugees who left the Idomeni camp in Greece heading to Macedonia across the Malarekas river. The leaflet appears to be a set of helpful instructions for refugees to get to Germany, but it resulted in a lethally sensational photo opportunity. Zafirovska recontextualizes the leaflet as a wall text emphasizing the abuse of language in the state of vulnerability and basic human belief in survival. When confronted with the text we can feel the relief that accompanies an offered solution, not knowing that it led to the commodification of human life and the perpetuation of voyeuristic mechanisms. These are the images that we later consume through social media, where our roles oscillate between victim and perpetrator.

For the past eight years, Zafirovska has been a working migrant on a gas platform in Scotland navigating the politics of movement as a result of her status of non-EU citizen. This status prevents the right to employment on EU land, leaving the sea as the only viable option for many Eastern Europeans seeking relief from the economic impoverishment in their own countries. Untitled is a video work that follows the path of “ditched” safety whistles that Zafirovska found discarded at the platform together with malfunctioning safety belts used by employees during the unsafe helicopter transportation from the land to the platform. We watch them get lost and reemerge in the water, providing us with a visceral experience of disorientation and instinct to survive. While the familiar movement of water hypnotizes us, any potential comfort is negated by a melody of whistling sounds, the enduring fight for breath and rescue.

Residency Unlimited is grateful to partner with IDIO Gallery, Brooklyn based contemporary art gallery and performance space that has been focused on experimental work across media with critical engagement. 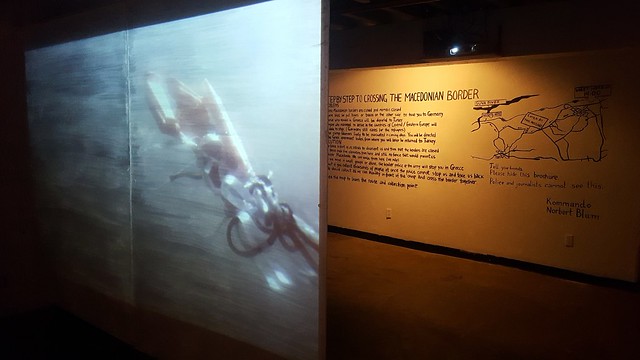 Zorica Zafirovska is a visual and conceptual artist whose multi-layered practice includes drawing, installation, and design and the use of a variety of materials such as human hair and blood. Zafirovska’s work explores social, scientific and genetic development and consumerism. A major focus is human trafficking worldwide and children from the streets of Skopje, Macedonia. She is a co-founder and member of The Art Institut, Frik Banda and the female artist’s initiation Momi.

We are grateful to IDIO Gallery for hosting this exhibition.